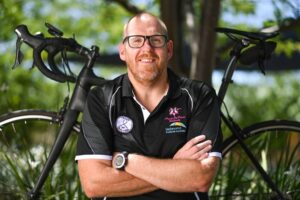 I’m a 43 year-old husband and father of two daughters and for the past 20 years, I’ve been a school teacher. Growing up with red hair and pale skin, and turning up to school wearing shorts day in, day out I only ever wore sunscreen for one reason when I was younger (and into my 30’s) – to avoid the physical pain of a sun burn.

Even though I grew up with slip, slop, slap and being aware of the need for sun protection, I never thought skin cancer would happen to me, especially as I got older. I had lived my whole life in Tasmania, with the coolest climate in the country.

In late October 2016, I discovered a nasty lump on my right thigh. I’d just been offered a position as school principal in Albury so as a family we were pre-occupied with deciding whether we were going to sell or rent out our house as we relocated from Hobart.

We made the decision to sell our house, and some work in the garden was required. I had been out in the garden all day with a friends –  and initially thought I’d been bitten. I looked at it and thought “I’ll be right”.

What I thought was a bite didn’t get better, so I went to the doctor. Within a few days, I had a lump removed from my right thigh and subsequently had the lymph nodes in my groin removed. Within weeks I was diagnosed with Stage III metastatic melanoma. When I was first diagnosed, I thought it was going to be cut out and I’d be fine.

Unfortunately, a routine PET (positron emission tomography) scan in November 2017 indicated that the cancer had spread to the nodes up inside my right hip, with the progression to a diagnosis of Stage IV metastatic melanoma.

It’s hard to describe how my family and I felt following the diagnosis. When I was first told about immunotherapy the doctor said, “we should get 8-10 years out of you”. I was just approaching my 40th birthday and had never expected to be told I might not make it to 50. The hardest part was explaining the situation to my kids. My eldest daughter, Ava, is 14 and I know it’s hard on her. What can you tell a child that age? My youngest daughter was little and didn’t understand but Ava knew exactly what it meant. It’s heartbreaking knowing how tough it is on my wife and kids.

I underwent a 2-year clinical immunotherapy trial at the Albury Wodonga Cancer Clinic and the Peter MacCallum Cancer Centre in Melbourne, which concluded in November 2019. The immunotherapy has been successful so far and has contained the spread of the disease. However, for me there is no cure as yet and I still undergo 4 monthly scans to ensure there has been no further spread.

I am genuinely passionate about raising awareness in the community and especially in schools and I want all Australians to know that prevention is better than cure. As an educator and a parent, I feel it is a message I need to spread. My eldest daughter is now in year nine and I frequently give talks to students her age where I’m very honest about my prognosis because they need to hear it.

I’ve had the opportunity to speak to numerous school, sports and community groups in Tasmania as well as across the Riverina. Everyone thinks they’re invincible at that age and even adults do until something bad happens to them. If each of these presentations has an impact on just one student (or adult), I will have made a difference. Melanoma doesn’t discriminate and we can all do something about it.

It is really important to educate people about the sun, UV and sun protection. I gave a talk at a local cricket club and even though it was raining, I took out the SunSmart app and showed them that the UV index was still reading 7 at 5:15pm. We need to use sun protection whenever the UV levels are 3 or higher. Thinking we only need to protect ourselves when the sun is out is outdated and dangerous. Using the five S’s of Sun Safety (Slip, Slop, Slap, Seek and Slide) along with the SunSmart app are vital for sun protection and skin cancer prevention.

Sadly, your browser is out of date!

Click the button below to check out newer, awesome options. Update my browser now