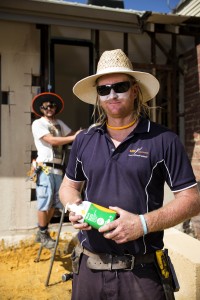 After a 17 year career in the building industry, several tragic events have prompted Scott Roediger to reassess priorities in his life.

Scott, who has operated his own carpentry business for the last twelve years, lost his younger brother Gavin just over a year ago, six months after he was diagnosed with melanoma. Gavin was aged just 30 at the time of his death.

Gavin had spent most of his life working outdoors, initially with the Australian Army where he served in many overseas operations including Iraq, and later working with Scott’s carpentry business. Both jobs required him to spend most of the day outdoors in the sun.

The first signs that something was wrong with Gavin’s health began with complaints of aches and pains, tiredness, and massive headaches.

“Eventually he was rushed to hospital and over the coming days and weeks, medical staff informed us that Gav had been diagnosed with a melanoma,” Scott said.

“The melanoma was too advanced for surgery because it had already entered his brain and spread throughout his body. These were some very hard days for our family and close friends as we came to grips with the reality of Gav’s disease. Despite the fact we were told there was no cure we never gave up hope,” he said.

“He was able to enter a government funded drug trial which bought him some more time, but he was never able to return to work and he was in and out of hospital from then on. Gav battled on courageously. He never complained or blamed the world; he just took it on the chin and got up each day to try and live to the best of his ability,” he said.

Scott said it was brutal to see the impact the disease had on him.

“I feel comfortable in knowing Gavin lived a great life; he served our great country on tours throughout the Middle East, he travelled the world and had many great adventures along the way. He was a good brother and a great uncle to our niece and nephew. He would have made a great dad and husband one day, but dying at 30 years of age was way too young.”

At the time of Gavin’s death, Scott already had a friend Graeme who was also being treated for melanoma. He was in the hospital just two doors down from Gavin’s room on the day Gavin died. Graeme passed away earlier this year aged 35, leaving behind a wife and two young children.

These events have taken their toll on Scott. He decided to sell his business, take some time out and think about a new direction in life, while also pursuing a new passion to promote awareness about skin cancer.

He said he gets fired up about young blokes who don’t wear a top when they’re working outdoors.

“Young blokes are difficult. They don’t want to put a hat on if it’s not the right hat, but it’s not rocket science to put sunscreen on or to wear a broad brimmed hat,” Scott said.

Scott said he knows the attitudes that prevail on worksites because there was a time when he was the same, thinking it was cool to work with your shirt off.

“For my part, it sucks that I needed a life or death situation to make me realise what’s important. I’d like to help young blokes realise it’s cool to have sunscreen slapped over your face and it doesn’t matter what you look like, but it’s not cool to have to go to hospital and have cancer,” he said.

Scott believes far too many people just don’t realise the risks associated with not being smart in the sun because they either don’t care or they don’t think it’s going to happen to them.

“Who cares if you’re not tanned or what you look like when you have sun cream slathered all over your face?”

“Wearing a broad brimmed hat, using sunscreen and wearing a rashie at the beach all need to become the cool thing to do. The bottom line is these simple measures may just prevent you having to go through the year I have,” he said.

Cancer Council WA SunSmart Manager Mark Strickland said he was looking forward to working with Scott to raise the profile of SunSmart issues with outdoor workers.

“Self employed outdoor workers are a group we’ve been keen to reach for a long time because no one is looking over their shoulders encouraging them to cover up in the sun. If you work for a big firm, the OSH team makes sure you are safe in the sun but if you work on your own, it’s up to you to protect yourself. Many tradies don’t seem to understand the risk and get far too much sun to stay healthy. Cancer Council doesn’t think that’s fair and we want to help turn this around.” he said.

“The problem is, as Scott has pointed out, tradies are a tough group to get the message through to, but with Scott’s knowledge of and experience in the building industry, we have far better prospects of achieving long term change.”

Scott says he hopes that by sharing his story, others who have been through similar experiences will join him to help change attitudes about sun protection.

“I just want to help more people to be smarter in the sun and I know Gav wanted that too.”

Sadly, your browser is out of date!

Click the button below to check out newer, awesome options. Update my browser now